Is Robin Hood Shooting the People in the Back?

Having only the dollar as the world’s gold standard currency is a duel-edged sword for retiring Americans. 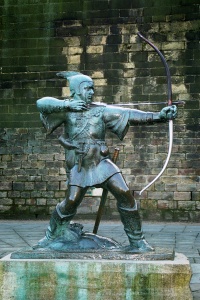 The Euro is a dead–as close to the graveyard as dead and dying Old Europe–so, that leaves the dollar. But that means there’s no alternative to holding dollars when threatened by runaway inflation at home.

To the extent Americans seek alternatives we see bubbles in real estate and commodities markets. Ultimately, we see crashes and a loss of capital because of these bubbles.

Interest rates should be higher to cover the inflation premium that the market would attach to the cowardly hopelessly self-defeating monetary policies of the left. Interest is the reward for productive people who delay present enjoyment for the possibility of greater future enjoyment–i.e., saving for the future which is the basis for all investment and the generation and re-generation of value.

How are the savers rewarded today? Those who planned for their future by working hard in the past are being robbed today. What we’re seeing is a government in the guise of Robin Hood that is shooting the people in the back who are not running to the king for a handout.

What we are seeing is the approach of liberal fascism. That is when the productive are so outnumbered they become slaves to the government and that is what leads the kind of productivity that we associate with the Postoffice and the DMV and communism under Stalin and Chairman Mao.

The 47%’rs ate the Golden Goose. Now, they’re stealing the silverware and that is no way to run a railroad.

Hot World Syndrome—fear of a hotter, more intimidating world than it actually is prompting a desire for more protection than is warranted by any actual threat. A Chance Meeting– We toured south along the Bicentennial Bike Trail in the Summer of 1980, working up appetites covering ~70 miles per day and staying at hiker/biker campgrounds at night along the Oregon/California coast (they were 50¢ a day at that time). The day's ride over, and after setting up tents, hitting the showers, and making a run to a close-by store, it was time to relax. The third in our little bicycle tour group, Tom, was about 30 yards away conversing with another knot of riders and treating himself to an entire cheesecake for dinner. He probably figured Jim and I would joke about what a pig he was eating that whole pie and decided to eat among strangers. Three hours later after sharing stories and remarking on a few coincidences that turned up here and there, Tom and one of the former strangers realized they were cousins, meeting in this most unlikely place for the first time. ~Mac
View all posts by Wagathon →
This entry was posted in The Cultural Hegemony of Climate Superstition and tagged business, current-events, economy, politics. Bookmark the permalink.

1 Response to Is Robin Hood Shooting the People in the Back?