An Honest Politician is a Step Away from Quicksand

Imagine if all life were like the life of a politician for high public office. 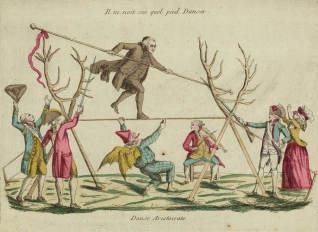 The chance comment, image or circumstance may be used to such effect by partisan fabricators of reality as to put an indelible brand across your entire being. It really shouldn’t be that way.

Such snapshots may on occasion be as fair a depiction of the human condition as catching a Supreme Court Justice passing wind; but, more often it’s an abortion of reality. “A fox should not be on the jury of a goose’s trial.” (Thomas Fuller)

It’s up to you to know that even mistakes are a big part of the real world. If you cannot take the time and invest a dispassionate interest in developing an appreciation for the whole picture then in all reason you bring no measure to your powers of observation and while your opinions may serve your purposes well enough you bring no value to society.

As the repute of wisdom, so of wit also, is very casual, sometimes a lucky saying or a pertinent reply has procured an esteem of wit to persons otherwise very shallow; so that, if such a one should have the ill-hap to strike a man dead with a smart saying, it ought in all reason and conscience to be judged but a chance medley. ~Bishop Robert South

We especially see the penchant for partisan branding of people based on their beliefs. The Left has long criticized religious leaders – even ones they’ve never met, like Christ — and they criticize beliefs of all kinds like people’s beliefs in gods (many or few) and especially a belief in just one god unless it’s The ONE: the Mystical CO2 – the god particle of the AGW True Believers of global warming alarmism. The Left is free to consider until the end of time the possibility of God/No-God or essence before existence or vice versa or mind over matter or no matter before matter or whatever but what has really happened is the Left has gone from shooting themselves in the foot to in the head–truth no longer matters to the Left, they have no devotion to honesty and are now destitute of the impulse to any uplifting activity. Dostoevsky probably said it best: “The West has lost Christ and that is why it is dying; that is the only reason.”

When will people admit George Bush got it right? Funding the UN-IPCC is continuing the funding of haughty haute academia’s feamongering climate change theatrics…

So long as global warming is a political issue — and that is all it will ever be until the Western economy falls on its face like it did in Greece — AGW will never be anything more than the blame game for the 47%’rs. The day may come that the vote for bigger and bigger government is greater than 50% of the vote at which time the Left will simply re-write history and none of this will have happened. Until then, when will AGW pseudo-scientists admit Mann’s ‘hockey stick’ is nothing more than a religious symbol? When will all scientists agree that the Left’s refusal to concede that the Earth has been in a cooling trend for the past 10,000 years is a moral breach that dishonors reason? See, Easterbrook Graph… A 10,000 year cooling trend.

An examination of a suite of climate models (GCMs) showed that, “On the whole, the evidence indicates that model trends in the troposphere are very likely inconsistent with observations that indicate that, since 1979, there is no signiﬁcant long-term ampliﬁcation factor relative to the surface.” ~David H. Douglass DH, et al. A comparison of tropical temperature trends with model predictions. Int. J. Climatol. (2007)

We can translate these findings using the language of the Left—e.g., Western academia’s GCMs that have been made de facto fortunetellers depicting what skeptics believe to be a failed forecast by global warming fearmongers of disastrous climate change calamity caused by industrial man in general and America in particular, really require a willing suspension of disbelief.

Or instead of beating around the Bush we can just call it like it is. Global warming is a counterfeit science peddled by charlatans and liars to an ignornant, hypocritical, envious and greedy electorate.

Hot World Syndrome—fear of a hotter, more intimidating world than it actually is prompting a desire for more protection than is warranted by any actual threat. A Chance Meeting– We toured south along the Bicentennial Bike Trail in the Summer of 1980, working up appetites covering ~70 miles per day and staying at hiker/biker campgrounds at night along the Oregon/California coast (they were 50¢ a day at that time). The day's ride over, and after setting up tents, hitting the showers, and making a run to a close-by store, it was time to relax. The third in our little bicycle tour group, Tom, was about 30 yards away conversing with another knot of riders and treating himself to an entire cheesecake for dinner. He probably figured Jim and I would joke about what a pig he was eating that whole pie and decided to eat among strangers. Three hours later after sharing stories and remarking on a few coincidences that turned up here and there, Tom and one of the former strangers realized they were cousins, meeting in this most unlikely place for the first time. ~Mac
View all posts by Wagathon →
This entry was posted in The Cultural Hegemony of Climate Superstition and tagged current-events, government, History, nature, News & Gossip, philosophy, politics, psychology, self-defeating attitudes, society, sociology, To be great is to be misunderstood. Bookmark the permalink.
Loading Comments...
%d bloggers like this: