Zeitgeist and the Golden Calf of Global Warming

The logic of global warming alarmism–i.e., fear of the hand of man — is a sign of the times. What about nature’s footprint? 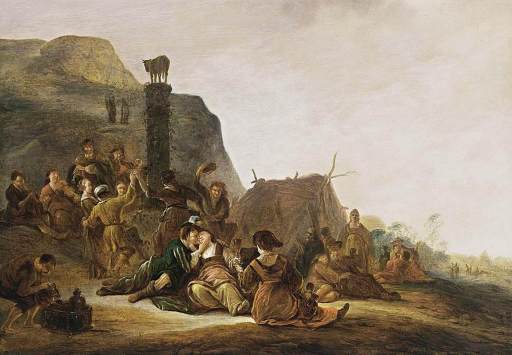 AGW has been called a mass mania. Is it more? Is it an anti-humanism that would consign humanity’s future to the whims of anti-industrialist Utopians in Ivory Towers? Is it a new age doomsday religion preaching apocalyptic Thermageddon? Has government-funded production of hybrid cars become a Golden Calf?

Realists have been watching this dumbing-down of society and the government-funded education system for years. Global warming alarmism is just one of many indications of the spiral into oblivion of Western civilization.

Leading the spiral down are accepted behaviors that lead to the ruction of morals, ethics and even the principles of the scientific method. These accepted behaviors undermine our personal faith and shared cultural confidence in our abilities to overcome ignorance and superstition with reason and knowledge. They rub all of our collective noses in societies’ lack of will to discriminate between good and bad.

We no longer feel the need to reward excellence and personal achievement over self-destruction and self-defeating nihilism. If you don’t know and understand that fear of global warming is simply a symptom of a sick, corrupt and mentally dysfunctional zeitgeist — a case of global societal ADHD that has spread across and infected all of the Leftist and liberal fascists in the Northern hemisphere — then, answer these questions:

“Why do scientists and news stories blame everything on global warming?

“… Why is warming always framed as bad news?

“Why does so much ‘research’ claim a warmer planet ‘may’ lead to more diarrhea, acne and childhood insomnia, more juvenile delinquency, war, violent crime and prostitution, death of the Loch Ness Monster – and even more Mongolian cows dying from cold weather?

“… Why is it a bad thing that more CO2 helps plants tolerate droughts better and re-vegetate deserts?

“… Why do ‘error corrections’ always seem to result in more warming than originally predicted, instead of less?

“And why do taxpayers have to shell out Big Bucks on this stuff?

“… If we didn’t know better, we’d think the operative rules were: Never seek logical or alternative answers, if you can blame a phenomenon or problem (like decreasing frog populations) on global warming. Do whatever it takes and fund whatever research is needed, to advance the goals of ending hydrocarbon use, increasing government control and ‘transforming’ society. And always include the terms ‘global warming’ or ‘climate change’ in any grant application.

“It may not be corruption. But it sure skews the research, conclusions and policy recommendations.”

Will the Left apologize to the American people for blaming George Bush and not Katrina for flooding New Orleans?

Who plays politics with the weather? It goes back to Al Gore, VP under Bill Clinton. The motivation behind the fearmongering about deep and disastrous climate change disruption has nothing to do with what is good for the people; and, it has everything to do with more power to an out-of-control federal bureaucracy that has grown too large to fail. Only the dishonest refuse to admit global warmnig is a Left vs. right issue that is more social than science.

Climatists of global warming alarmism essentially have given up pretending that they can use science to make their case against Western industrial man; they’ve given up on reason. The climatism of the weather fearmongers has evolved to the point now where it has the credibility of earthquake prediction science. The official `science’ of the global warming alarmist community is simply to pray for catastrophe and then point. The only real `consensus’ that exists, now that Bush is gone, is to simply blame capitalism whatever Nature brings our way.

Terence Corcoran (Financial Post, 29-Oct-12) gets it and correctly exposes the warp and woof of the Left’s hype machinery, busily weaving hairshirts for the rest of us to wear, as follows: As gloom descended over the warmist camps across the continent, their overheated claims flickering dimly like dying campfires, their cause lost, there suddenly rose in the East a powerful force [Hurricane Sandy]. Look! What’s that on the horizon? A mighty blast of good news! FRANKENSTORM…The Natural Resources Defence Fund tweeted the blessed arrival of Sandy. Soon the idea [i.e., linking carbon emissions with natural disasters] was in all the media where such junk science routinely finds a home: The Huffington Post, The Atlantic, blogs at The Washington Post.

If the Left is looking for human-caused disaster, they need look no further than communism, the socialism of Greece and dead and dying Old Europe, the liberal Utopianism of California, radical Islam’s inhumanity to man and the Democrat party’s spending of $6 Trillion Dollars in the last four years without leaving a trace.

Hot World Syndrome—fear of a hotter, more intimidating world than it actually is prompting a desire for more protection than is warranted by any actual threat. A Chance Meeting– We toured south along the Bicentennial Bike Trail in the Summer of 1980, working up appetites covering ~70 miles per day and staying at hiker/biker campgrounds at night along the Oregon/California coast (they were 50¢ a day at that time). The day's ride over, and after setting up tents, hitting the showers, and making a run to a close-by store, it was time to relax. The third in our little bicycle tour group, Tom, was about 30 yards away conversing with another knot of riders and treating himself to an entire cheesecake for dinner. He probably figured Jim and I would joke about what a pig he was eating that whole pie and decided to eat among strangers. Three hours later after sharing stories and remarking on a few coincidences that turned up here and there, Tom and one of the former strangers realized they were cousins, meeting in this most unlikely place for the first time. ~Mac
View all posts by Wagathon →
This entry was posted in The Cultural Hegemony of Climate Superstition and tagged AGW, Blame America, Blame Business, Blame Christians and Jews, climate, climate change, collective noses, current-events, economy, environment, global warming alarmists, Golden Calf, government, government bureaucrat, ivory towers, liberal fascism, liberal utopianism, philosophy, politics, psychology, religion, science, self-defeating attitudes, society. Bookmark the permalink.

3 Responses to Zeitgeist and the Golden Calf of Global Warming