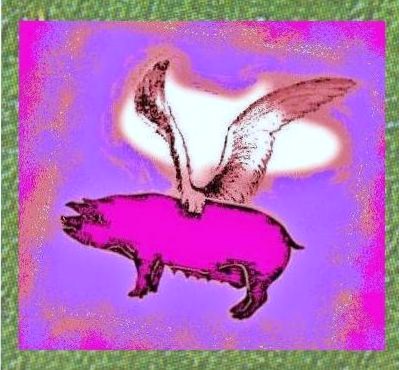 Thousands of years of human evolution and we only now learn them som’bitches can fly. Sheesh!

The Ouija board science of global warming is an excellent example of why so many scientists who once believed humans cause global warming (the AGW hypothesis) have long since headed to the UN exits.

The phenomenon of AGW global warming alarmism shares so much in common with religious beliefs that scientists who are closest to the phenonenon often cannot see it until it is pointed out by someone like Michael Chrichton. AGW is much like an apocalyptic doomsday faith that Crichton tells us was borrowed from Christianity, as follows:

“Today, one of the most powerful religions in the Western World is environmentalism. Environmentalism seems to be the religion of choice for urban atheists. Why do I say it’s a religion? Well, just look at the beliefs. If you look carefully, you see that environmentalism is in fact a perfect 21st century remapping of traditional Judeo-Christian beliefs and myths.

“There’s an initial Eden, a paradise, a state of grace and unity with nature, there’s a fall from grace into a state of pollution as a result of eating from the tree of knowledge, and as a result of our actions there is a judgment day coming for us all. We are all energy sinners, doomed to die, unless we seek salvation, which is now called sustainability. Sustainability is salvation in the church of the environment. Just as organic food is its communion, that pesticide-free wafer that the right people with the right beliefs, imbibe.

What we see is the certainty of the believer–much like a child believes in Santa Claus.  Schoolteachers are telling us children what to think not how to think. And, of course, before long some of the believers feel compelled to deal with the absence of proof. Some even become skeptics. Some perhaps are embarassed at the hypocrisy of labeling modernity the fruit of the poisonous tree all while enjoing the comfort and security of a government job and lifetime tenure.

But, what motivates the schoolteachers of AGW? It all stems from an overwhelming sense of powerlessness which cannot be overcome except by gaining power over others. This is how the current state of AGW Liberal Fascism has come to exist and come to be maintained, starting with the abandonment of the scientific method in the Ivory Towers of Western academia in favor of consulting the spirits for answers to questions–all together now: oh, Qui! and Ja! Ja!

Do you think for an instant that Leftist-leaning liberal Utopian schoolteachers with Michael Mann’s ‘hockey stick’ graph hanging over their heads like an oversized poster of Chairman Mao will ever admit AGW Global Warming is a scientific fraud on steroids? Will these schoolteachers of AGW ever bother to consider the moral implications of pushing their warmanist beliefs in the classroms?

So, we get no real education from Western academia and its punked science of climate change. However, like waking up after seeing a brief glimpse of another reality afforded only to those able to swim to the surface after holding their breath and squeezing through a fissure in a deep dream, we learn what really motivates global warming alarmists. We get a peek at the superstition, the dogma, the casting of chicken bones and spells by science illiterates and authoritarians alike and we see that beliefs of Western scientists and government-funded educators are no different than revelations of witch doctors, shamans, and soothsayers throughout human history who found it more useful to themselves to support a hoax than to admit ignorance to others, even when it meant lying to children.

We are rightly suspicious of monocausal explanations. And, there is not enough computing power on Earth to resolve a model embodying all of the relationships even if we knew all the variables. The real problem is, the average “seer of seers” and “sage of sages” climatist of Western academia refuses to abandon a monocausal explanation for global warming and the reason for that refusal lies outside of science–it lies in the real world where global waming stopped more than a decade ago.

Enormous uncertainties persist with respect to the role of clouds in climate change. Moreover, models that strive to incorporate everything, from aerosols to vegetation and volcanoes to ocean currents, may look convincing, but the error range associated with each additional factor results in near-total uncertainty. Yet, there is a greater concern. Throughout the history of science, monocausal explanations that overemphasize the dominance of one factor in immensely complex processes (in this case, the human-induced emissions of greenhouse gases) have been inevitably replaced by more powerful theories. ~Philp Stott

The inconvenient truth for global warming alarmists is that the moment they changed the argument from ‘global warming’ to ‘climate change’ any chance for a reasoned scientific-based argument was forever lost. It is no surprise that climate changes–all scientists understand that climate will alway change no matter what government scientists want you to think or do about it. “It would be newsworthy if climate stopped changing.” (Ibid.)

The inconvenient truth remains that climate is the most complex, coupled, nonlinear, chaotic system known. In such a system, both doing something (emitting human-induced gases) and not doing something (not emitting) at the margins are equally unpredictable. What climate will we produce? Will it be better? And, if we get there, won’t it, too, change? (Ibid.)

Hot World Syndrome—fear of a hotter, more intimidating world than it actually is prompting a desire for more protection than is warranted by any actual threat. A Chance Meeting– We toured south along the Bicentennial Bike Trail in the Summer of 1980, working up appetites covering ~70 miles per day and staying at hiker/biker campgrounds at night along the Oregon/California coast (they were 50¢ a day at that time). The day's ride over, and after setting up tents, hitting the showers, and making a run to a close-by store, it was time to relax. The third in our little bicycle tour group, Tom, was about 30 yards away conversing with another knot of riders and treating himself to an entire cheesecake for dinner. He probably figured Jim and I would joke about what a pig he was eating that whole pie and decided to eat among strangers. Three hours later after sharing stories and remarking on a few coincidences that turned up here and there, Tom and one of the former strangers realized they were cousins, meeting in this most unlikely place for the first time. ~Mac
View all posts by Wagathon →
This entry was posted in The Cultural Hegemony of Climate Superstition and tagged climate, human-rights, michael chrichton, religion, science. Bookmark the permalink.
Loading Comments...
%d bloggers like this: