The Instantiate Nature of Global Warming 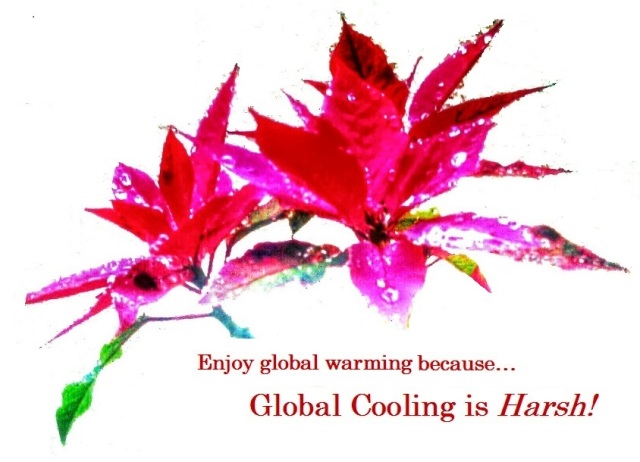 Notice how there is never an end, to what we can dream up, and want to say, about how we feel, about any complex matter? Researching thought processes is like describing what makes something funny. We have objectified nothing if in the end, all our rationalizations cannot be used to enable someone to program a computer to make a decision. Our inability to objectify a problem simply acknowledges the subjectivity we bring to decision-making.

The weights that are given to various facts, beliefs and assumptions will vary from person-to-person and group-to-group. The complexity of the matter increases as we add the social and psychological dynamics of foundational principles like, accountability, personal responsibility and individual liberty until finally, we realize it is impossible to arrive at sensible solutions except with a market-based approach.

The verdict of decision-makers are most trustworthy when people vote with their own dollars. Voting with what you own essentially is voting your own life’s blood because as that is what is invested to earn those dollars. The problem we face in the West today is too many people are voting with the life’s blood of others. We are turning the productive into victims of ritual blood-letting and that is beginning to buckle society at the knees.

We have become victims of instantiate thinking –i.e., a reductionist logic where we accept as our understanding of the whole of something, nothing more that the creation of the mind of someone else, based only on a few snapshots. For example, with respect global warming alarmists we are looking through the blinking eyes of government scientists who in turn have turned the multiple interacting instantiations of an infinitely grander reality ruled by natural causes – comprised of global atmospheric, oceanic and celestial dynamics – into arrays of numbers to make still images that are simple enough to be easily understood and yet have little if any usefulness outside a digital world.

This is the world in which we live: INEXPENSIVE HYDROCARBON-BASED ENERGY IS CENTRAL TO ECONOMIC GROWTH AND TO ENABLING THE POOR TO RISE UP FROM POVERTY

The “triggering” determination at issue here is at the core of EPA’s current program to restrict hydrocarbon based energy and make it more expensive and less available. The Endangerment Finding and subsequent triggering determination came about when Congress failed to pass President Obama’s proposed “cap and trade” legislation during his first term. As described by the President during his 2008 campaign, that legislation was specifically intended to reduce carbon emissions by forcing a massive increase in the price of energy: “Under my plan . . . electricity rates would necessarily skyrocket.” Erica Martinson, Uttered in 2008, Still Haunting Obama in 2012, Politico (Apr. 5, 2012, 11: 37 PM), http://www.Politico.com/news/stories/0412/74892.html. Adding C02 to the stationary source PSD permitting program seeks to accomplish the same result through forcing the massive closure of coal based power plants (a process already well underway) and hindering and delaying the construction and operation of power sources that use the cheapest forms of energy, which are hydrocarbon based energy. And EPA seeks to achieve that result without new legislation, and instead as a supposed interpretation of over 35-year-old legislation never previously thought to cover this subject matter.

Everyone knows global warming is a Left versus right political issue but, it also pits those who care about what happens today — comprised of those who actually must work for a living– with those who make a living simply pretending to care about tomorrow:

Who among us,
other than those who eschew complexity,
will look at the forces that effect Earth’s climate,
– the sun, the moon, the planets and all the stars –
and see only a fingerprint of humanity?

NOTICE: WordPress informed me that based on the numbers, if this blog were a NYC subway train, it would take about 3 trips to carry the many people who have viewed it. And, I am told that some of the most popular posts were written before last year–i.e., an indication that what’s written has staying power!  For example: The Academic Winter of Global Warming Alarmism.

Or, browse through these when you have the time:

How Close Was America to a Leftist Coup?
Is it Okay to Get Politics Out of Science?
Zeitgeist and the Golden Calf of Global Warming
Economic Growth and the Irish Potato Famine
Fear of Global Warming a Phobia

Hot World Syndrome—fear of a hotter, more intimidating world than it actually is prompting a desire for more protection than is warranted by any actual threat. A Chance Meeting– We toured south along the Bicentennial Bike Trail in the Summer of 1980, working up appetites covering ~70 miles per day and staying at hiker/biker campgrounds at night along the Oregon/California coast (they were 50¢ a day at that time). The day's ride over, and after setting up tents, hitting the showers, and making a run to a close-by store, it was time to relax. The third in our little bicycle tour group, Tom, was about 30 yards away conversing with another knot of riders and treating himself to an entire cheesecake for dinner. He probably figured Jim and I would joke about what a pig he was eating that whole pie and decided to eat among strangers. Three hours later after sharing stories and remarking on a few coincidences that turned up here and there, Tom and one of the former strangers realized they were cousins, meeting in this most unlikely place for the first time. ~Mac
View all posts by Wagathon →
This entry was posted in The Cultural Hegemony of Climate Superstition and tagged climate, climate change, economics, environment, EPA, global warming, History, hockey stick, Michael Mann, nature, News, philosophy, politics, science, Western academia. Bookmark the permalink.
Loading Comments...
%d bloggers like this: